Jakob could trace his ancestry back to the end of the 17th century, but the Hildebrands had farmed in the village for many centuries. Jakob’s great grandfather served an apprenticeship in tailoring; this skill was passed on to later generations but Jakob had to find other means of earning a living in the depressed conditions of the 1830s.

After he was admitted to full citizenship in 1840, shortly before his 25th birthday, he married Anna Katharina Heinz, his long-time sweetheart. During the next fourteen years the couple had six children (including Elisabetha, born 1848), but two sons and two daughters died. In 1855, another son, Peter, was born and, although he thrived, the mother died nine months later. Left with his three children to care for, Jakob formed a relationship with Elisabetha Margaretha nee Ziegler, the widow of Jakob Häuser, who had a young daughter – it is possible that she was housekeeping for Jakob and his family.

With the four children, Elisabetha Margaretha and Jakob left the village in time to board the vessel “Euroclydon” which sailed from Liverpool on 14th May 1857 for Melbourne. Black Ball Line, the new owner of the ship, had renamed her “Greyhound”, but this did nothing to speed their vessel over the tedious journey of almost fifteen weeks. As Elisabetha was nearly six months pregnant when they disembarked, the family stayed in Melbourne. Her baby, Caroline, was born in Port Melbourne in mid-December. Meantime, Jakob and Elisabetha formalised their relationship; they married on 7th October in the Lutheran Church.

Their son George was born in 1860. Soon after this Jakob, though still calling himself a tailor, went into the Wood and Coal supply business. So that he could own property, he became naturalised in 1861. He established a home and wood-yard in Exploration Lane near the northeast boundary of the Melbourne Business District. During the next five years, two more sons were born, and a daughter who lived only two years.

Jakob had a drinking problem and his periodic outbursts made life difficult for his family. Some of the older girls moved away and eventually went to New Zealand. Jakob had a serious bout of the DTs in August 1870 – he went to bed after a very solid drinking session and was asleep when his wife went to bed. He had left for work when Elisabetha awoke next morning and she never saw him alive again – a fortnight later Jakob’s body was found floating in the Yarra River, on Melbourne’s southern boundary. A post mortem established that death was caused by drowning. A coroner’s jury brought in a completely unsubstantiated verdict of ‘Suicide, by Drowning, whilst of Unsound Mind’.

Jakob Hildebrand was interred in Melbourne General Cemetery on 27th August 1870, leaving Elisabetha to finish the rearing of her four dependent children: Caroline 12, George 10, Reinhard 8, John George 4. Jakob’s son Peter was also living with the family. Jakob’s widow survived him by only six years, when alcohol also ended her life. 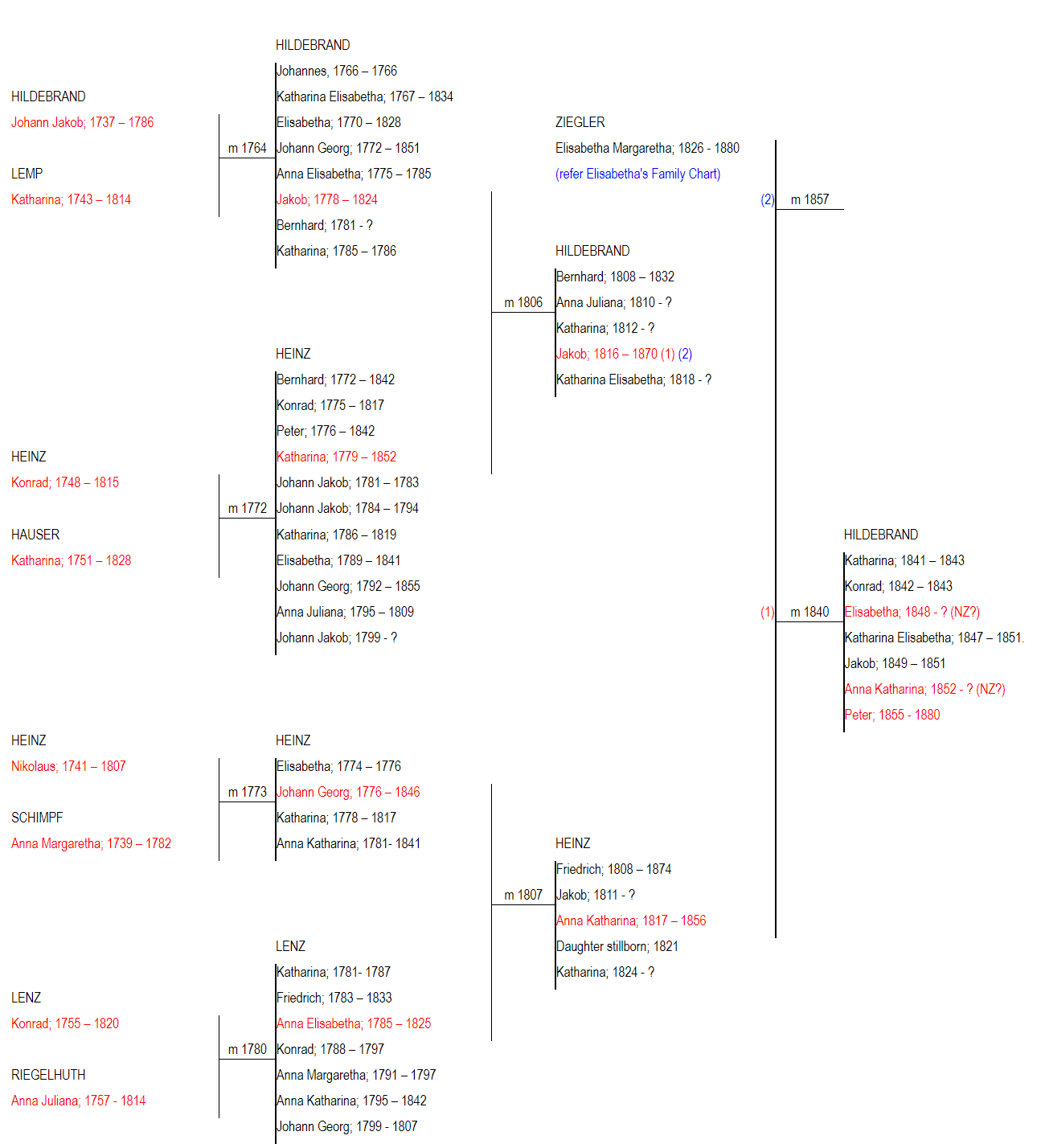