Born on 24th March 1846, Anna Elisabetha was the second of four girls born to Johann Konrad Muller by his first wife, Margaretha Schimpf. There were five boys as well but three of them did not survive. Like all the Mullers, their father was a nail-smith, carrying on the craft that his father had brought to the village in the early 1800s – and, like all the Mullers, he was destined to leave the village. In Konrad’s case, his departure was precipitated by the death of his wife. A year later, in June 1857, he married Elisabetha nee Broek, widow of Konrad Schimpf VIII. They left Juliana, Konrad’s five-year-old daughter, with relatives and took the others to England where they met up with Konrad’s brother Ludwig and his wife Juliana. For the long journey to Melbourne on “Queen of the East”, Anna Elisabetha and her elder sister Christina posed as “daughters” of their uncle and aunt, and the other three siblings travelled with their father and his wife. In this way, even the 19 year old Ludwig could travel half-fare and remain with the family group.

They left Liverpool on 16th November 1857 on a voyage that was an exciting one for Anna Elisabetha and reached Melbourne on 24th February 1858 in the heat of the Victorian summer. The men tried prospecting on the diggings around Creswick, where a number of other Nieder-Weisel immigrants were working. There, Anna Elisabetha became acquainted with Jakob Bill. In 1860, she went to Melbourne to be prepared for her first communion in her 14th year, in accordance with their village custom. In about 1864, Konrad decided to go farming; he bought land at Italian Hill near Daylesford and moved his family to Smiths Creek. When they were leaving Creswick, Jakob Bill proposed to Anna Elisabetha and her father agreed to their marriage.

The ceremony took place in the Methodist Church near Smiths Creek on 16th March 1865. Jakob took his bride back to Creswick where Anna Elisabetha gave birth to their first son, Ludwig, in 1866. Jakob then took up a selection near his father-in-law’s property and set about clearing it of its dense cover of timber and preparing the soil for crops. For two decades Anna Elisabetha was kept busy rearing her expanding family: Jacob born 1868; Anna Margaretha 1871; Albino in 1873; Anna Elisabetha 1877; twins Conrad and Christopher on New Year’s Day 1880; Elisabetha 1881; Philipp William 1883; John Henry 1887; and Catherine in 1890. By now she was in her 44th year and perhaps she was not able to nourish the baby properly – it lived for only twelve days and was the first of her children to die. In 1892 Anna Elisabetha suffered another loss when her son Jacob died of typhoid fever.

In 1895 her husband decided to take up another selection in north-western Victoria at Hopetoun. He took Albino and Anna Margaretha to help him get started with a new house, but he became ill and had to return to Italian Hill, where he died on 19th June 1898. Anna Elisabetha buried her husband in the Daylesford cemetery and began 44 lonely years of widowhood. Her son Philip William took over the farm and provided his mother with financial security for the rest of her life.

Conrad had gone to West Australia looking for work; when he became ill, Anna Elisabetha made the long trip to visit him and persuade him to return; he did, but died soon after in 1906. All the other children married; other than Albino, they all had children, which provided a focus for the final chapter of Anna Elisabetha’s life, although Anna Margaretha and her husband took their family to Queensland.

In 1926, Anna Elisabetha took the unusual step of becoming naturalised. Her tiny frame, less than 1.5m in height, belied a strong constitution, which kept her active until a few days before her 96th birthday. She joined Jakob in the Daylesford cemetery on 21st Mar 1942, having outlived five of her children. 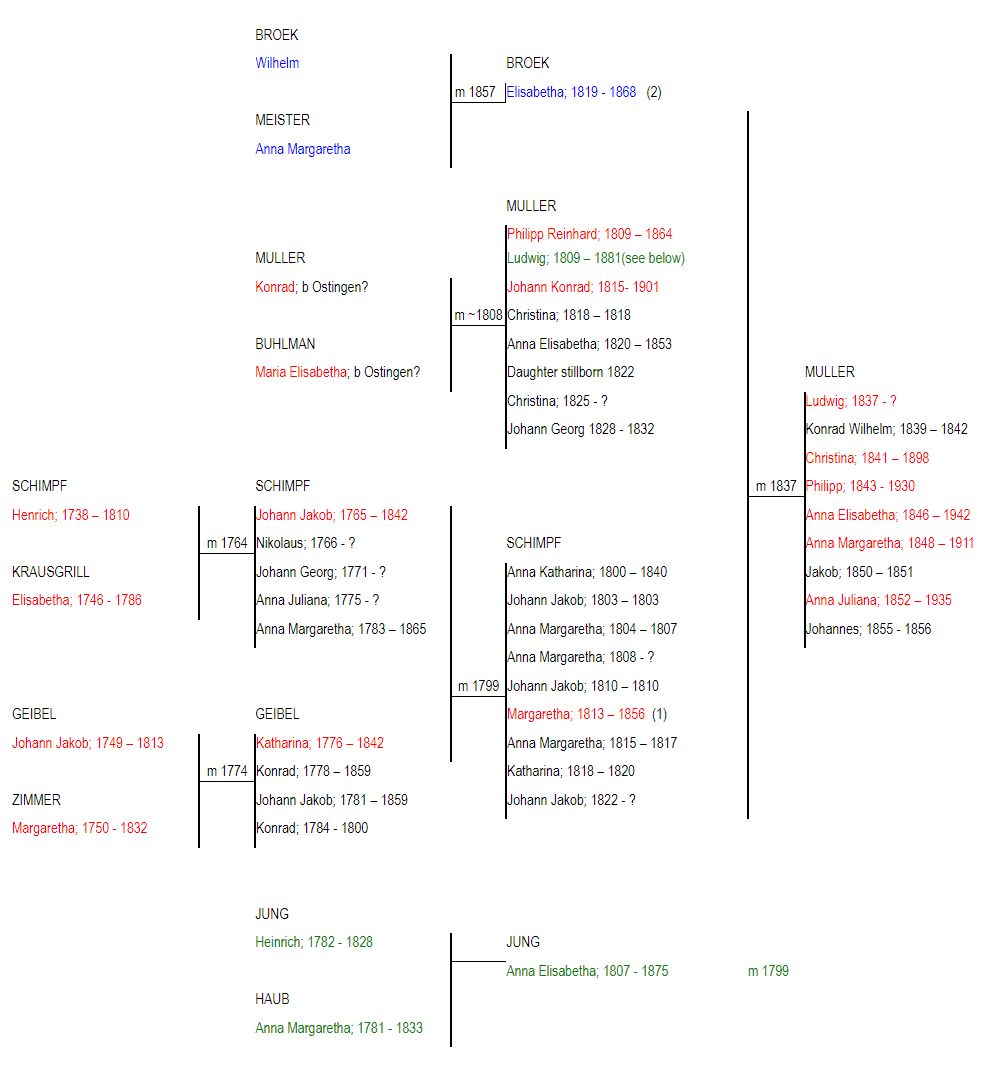